CLEVELAND, Ohio (WOIO) - The man who pleaded guilty to shooting an 18-year-old at Madison Park in Lakewood faced a judge for sentencing on Wednesday afternoon.

Emmanuel Cedeno, who was 19 years old at the time of the crime, was sentenced to a prison term of between 6 to 7.5 years. He previously pleaded guilty to felonious assault in connection to the April 2021 shooting.

Police said the male victim, who was 18 when he was shot, survived the incident, but he remains paralyzed from the waist down and confined to a wheelchair.

Newly-Awarded $1,000,000 Grant Will Help Launch G.O.L.D. Unit, Focus On Genealogical Testing of 20 Most Wanted Cold Case Rapists
CLEVELAND – Cuyahoga County Prosecutor Michael C. O’Malley announced that the Cuyahoga County Prosecutor’s Office (CCPO) Sexual Assault Kit Task Force (SAKTF) was awarded a $1,000,000 grant from the U.S. Department of Justice (USDOJ). The funds will go towards personnel staffing, victim advocacy and research partnerships, training, and other resources. This grant, along with prior USDOJ funding, will also help launch the office’s newly-formed G.O.L.D. Unit (Genetic Operations Linking DNA). The GOLD Unit’s work will include:
Expanding SAKTF investigations to include sexual assault kits (SAKs) submitted from 2012 to 2019
Genealogical testing of cold case sexual assaults
Genealogical testing of cold case sexually-motivated homicides
Continuing the Lawfully Owed DNA project
“We are excited to announce this new unit whose genetically-focused operations will utilize the newest forms of technology to identify violent predators and bring them to long-overdue justice,” said Special Investigations Division Chief Richard Bell. “These horrific cases forever change victims’ lives, but it is our hope through this new technology, that we will finally be able to provide a sense of closure for them.
Friday, September 11, 2020 9:59 AM

Click on the link and watch the video along with the article.

"A model for this effort is Cuyahoga County, Ohio, which includes Cleveland, where authorities have identified more than 15,300 missing DNA profiles. Authorities started with the easiest group, those still locked up or on probation. So far, they have collected more than 2,300 of those missing profiles and have gotten 87 hits in CODIS on unsolved crimes, including six homicides and 38 sexual assaults."

My Task Force is the National MODEL for identifying and collecting DNA from people who owe their DNA. Very proud of the men and women who bring Justice to these crime victims.

For the General Election, November 3rd, 2020 Richard A. Bell Receives the Most "EXCELLENT" Ratings in his Race. Judge4Yourself.com 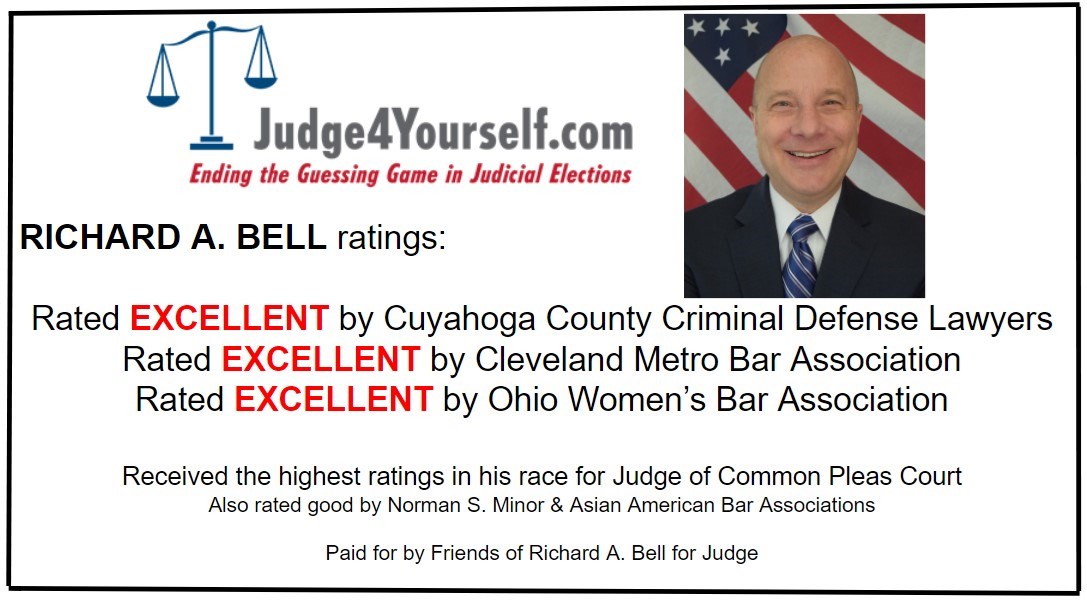 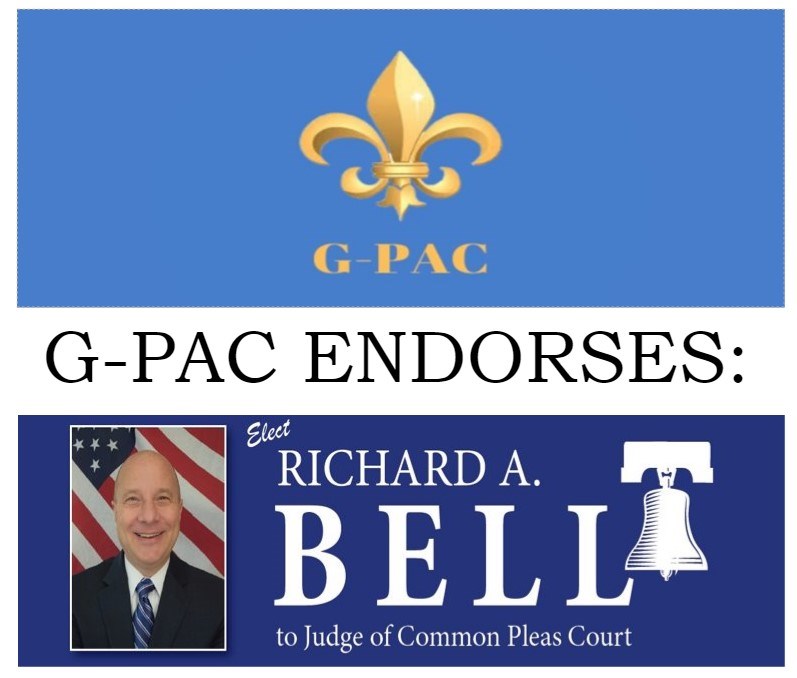 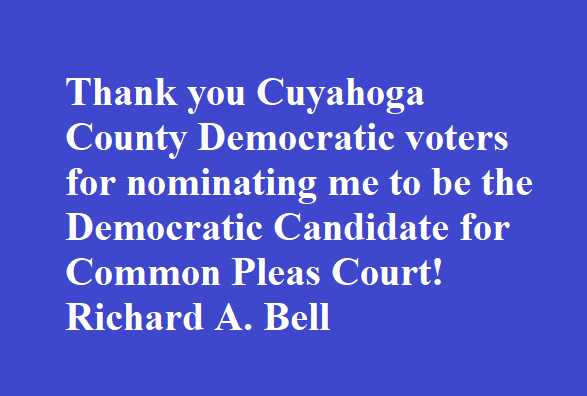 How to Obtain an Absentee Vote by Mail Application

The March 17th election is still on-- please vote by mail by APRIL 17TH. Here is how to get your ballot!! Click the link below!

How to Obtain an Absentee Vote by Mail Application 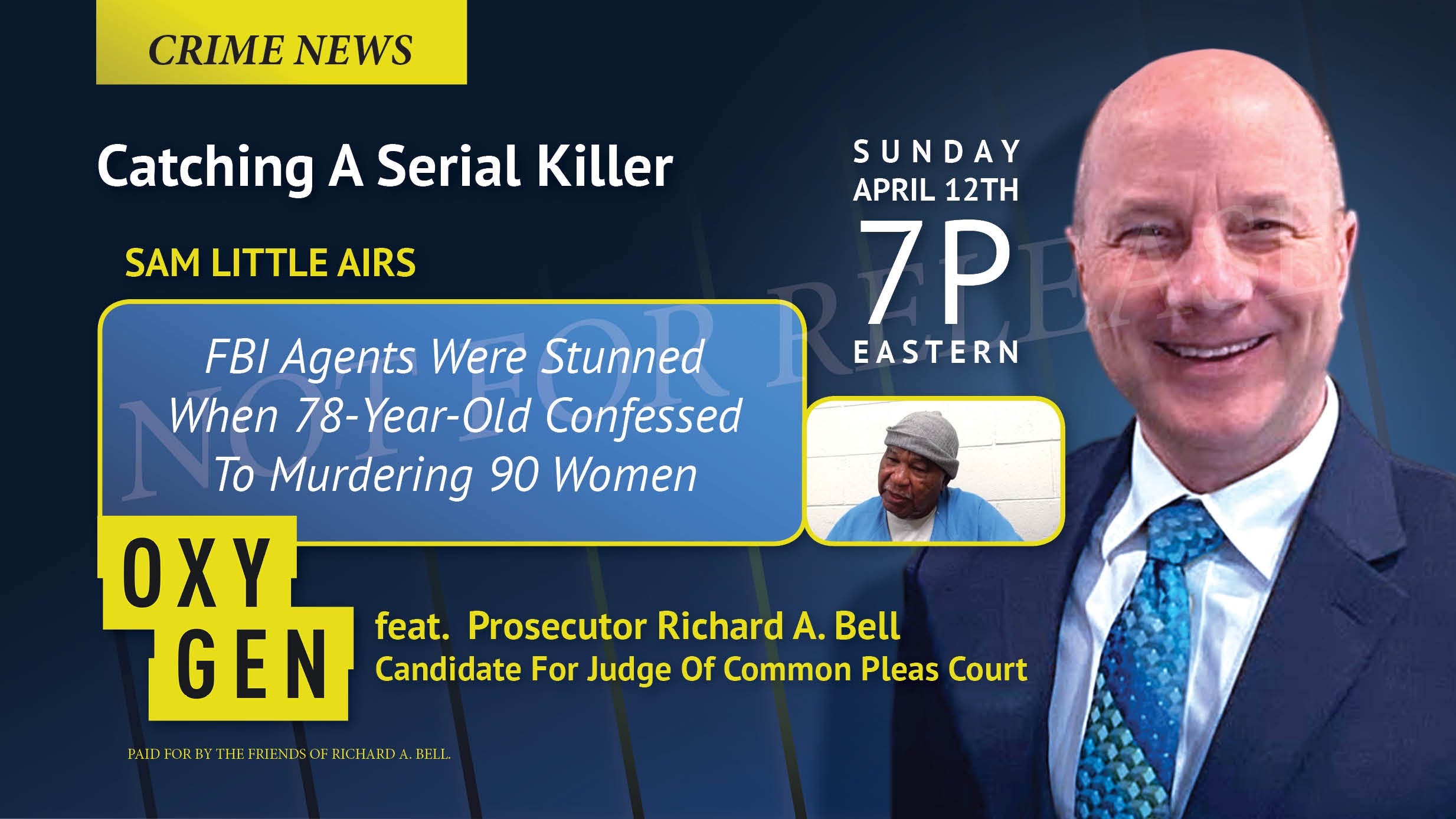 The Plain Dealer Endorsed "Richard A. Bell in the Democratic Primary for Cuyahoga County Common Pleas judge, for the Unexpired Term" 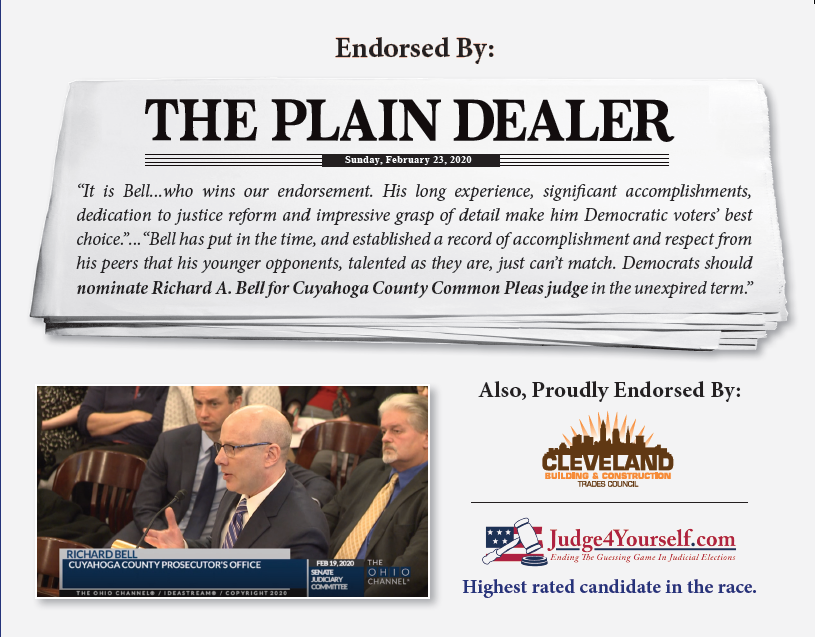 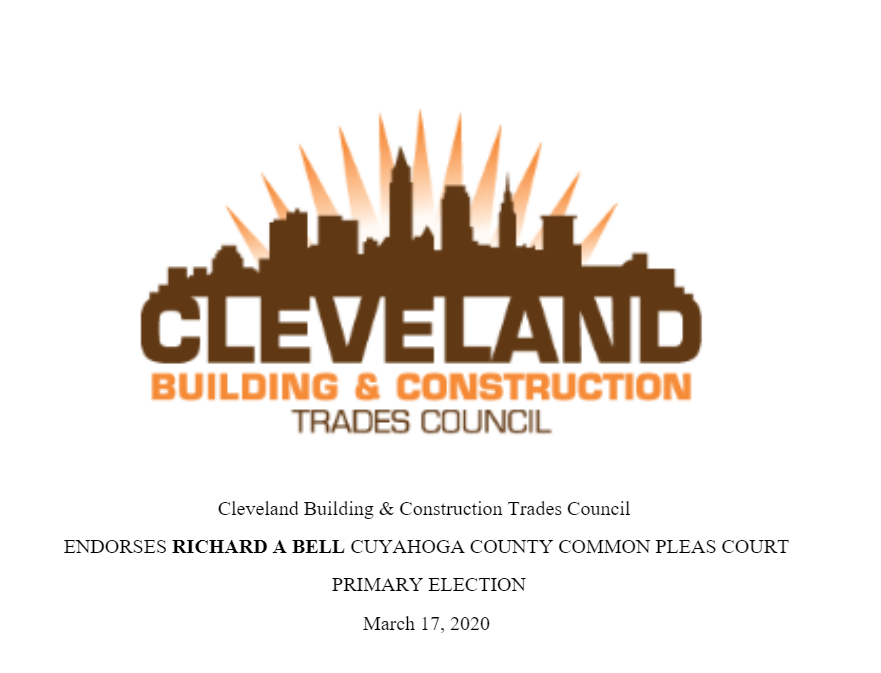 Thank you G-PAC for your endorsement for Richard A. Bell for Judge 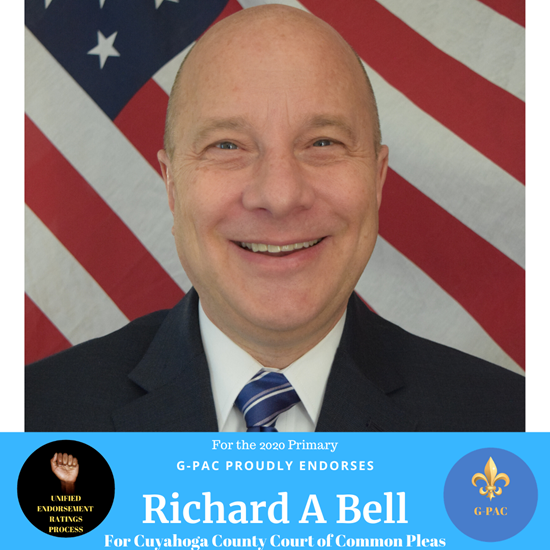 Researchers at Case Western Reserve University looked at hundreds of previously untested sexual assault kits and found that many of these suspected rapists went on to commit multiple crimes.

I filed my petitions today with the Cuyahoga County Board of Elections for Common Pleas Court Judge and earned the endorsement of Rep. Marcia L. Fudge! Thanks to all who signed my petitions and the Congresswoman for your confidence and support! 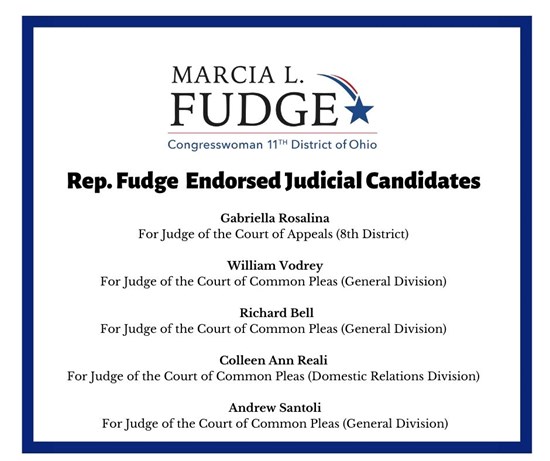 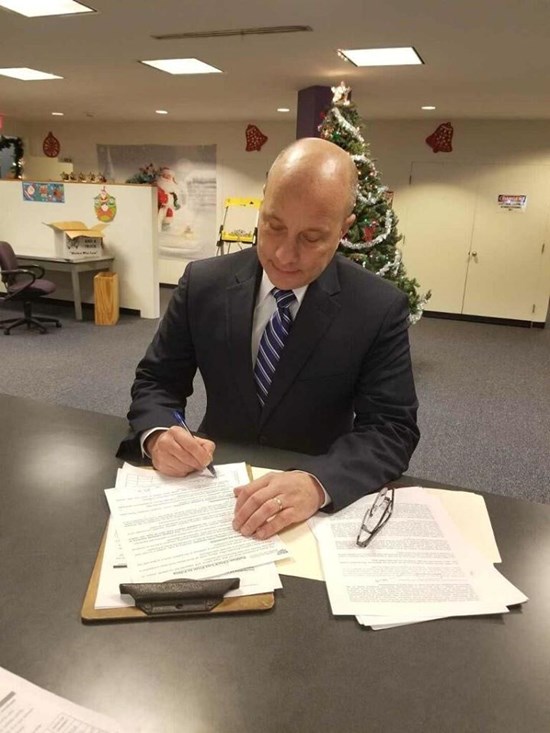 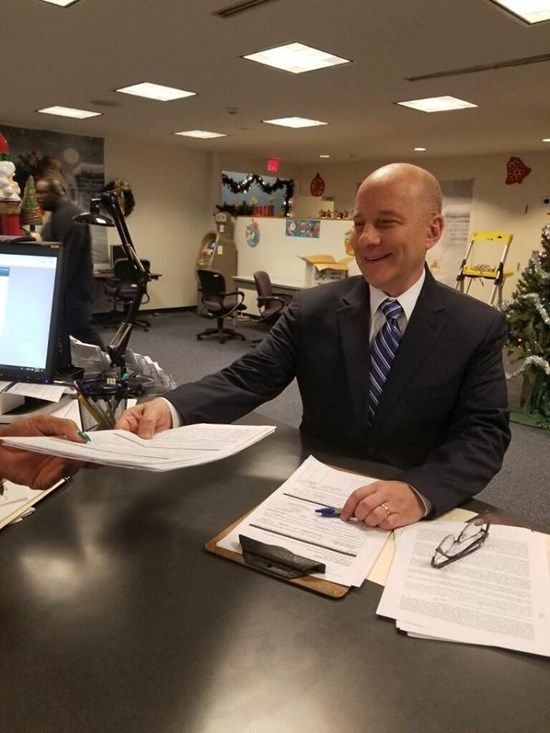 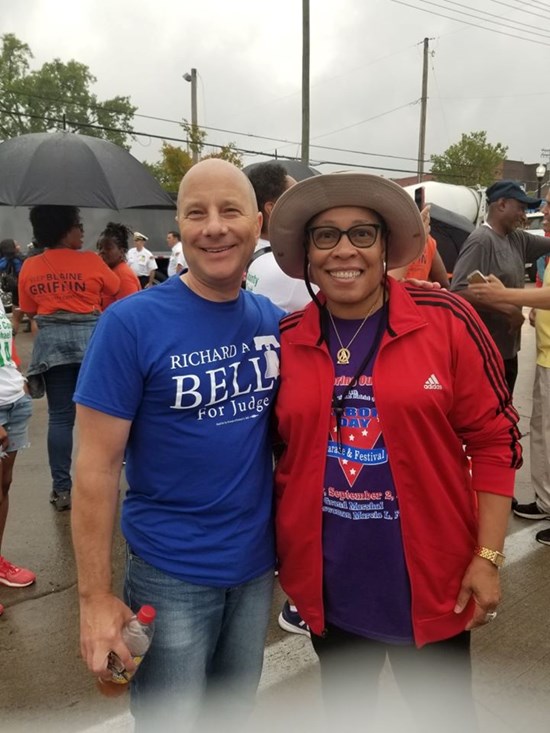 "Interrogating and Prosecuting this Serial Killer brought some Justice to the families of the victims. Little is the worst kind of monster because he was so calculating. He knew who to target and he hid his crimes well. He manipulated and fooled so many people for decades. Meeting and talking to him...you would never know he could turn on a dime and strangle someone to death..until it was too late." RICHARD BELL

Today I was honored to present in Chicago to the International Association of Chiefs of Police (IACP). (Over 1,000 police chiefs). Our Cuyahoga County Cold Case Sexual Assault Kit Task Force leads the nation in successful prosecutions. 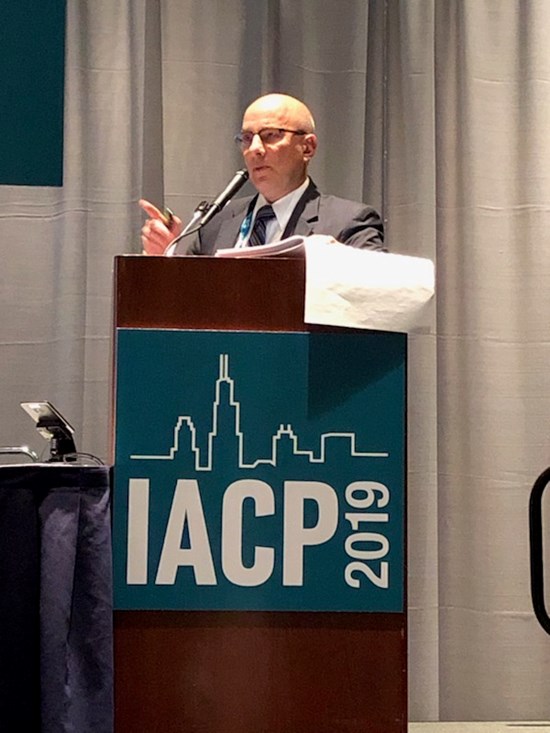 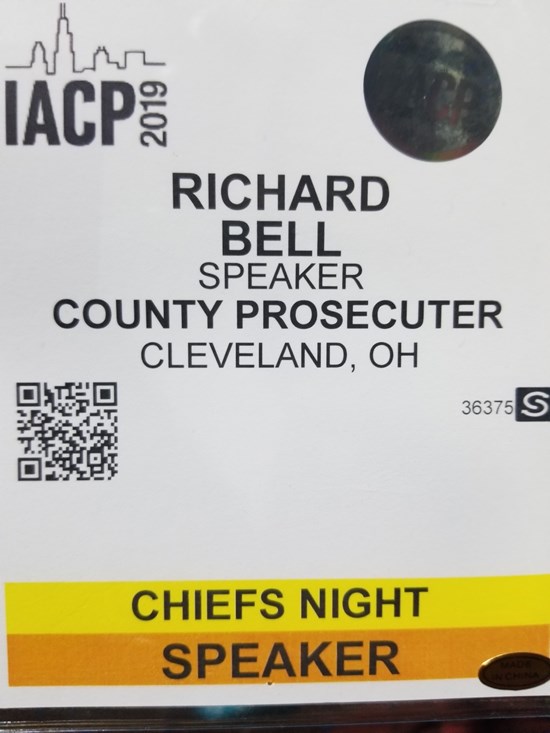 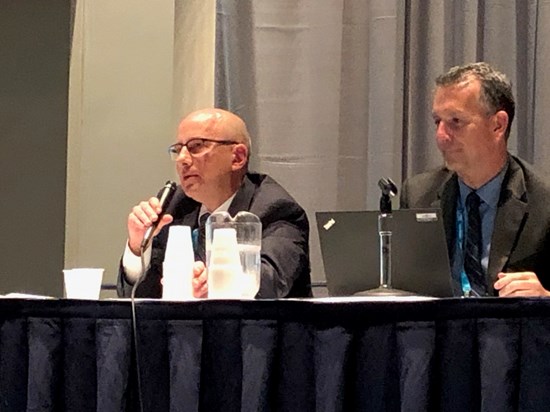 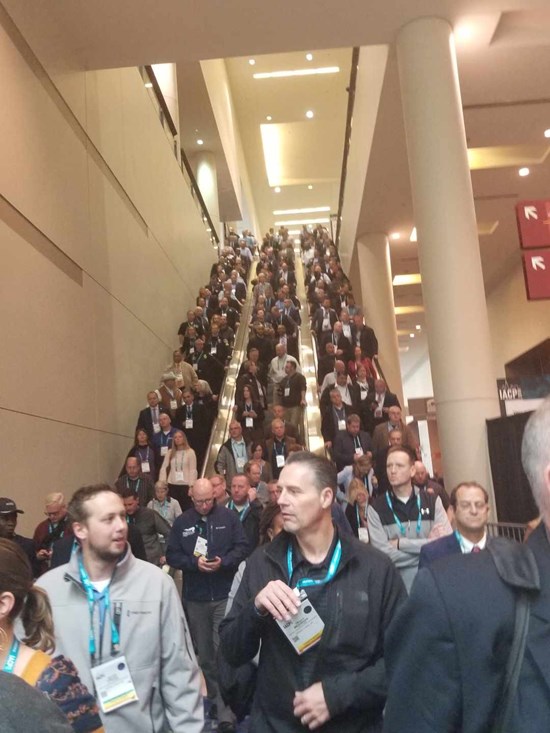 I will be presenting at a conference for the Sexual Response Team to give an update on our Task Force and to do a case study of how a Serial Rapist took advantage of 7 victim's vulnerabilities before he was stopped.

On Tuesday, October 15th, I will be presenting on behalf of the Cuyahoga County Prosecutor's Office for a 1.5 hour CLE Seminar on "Advocating for Survivors of Domestic Violence."

The topic presented includes:
Advocating for your client when they are a survivor of domestic violence requires special skills and knowledge to ensure their needs are being met with zealousness and compassion. Our panel of experts will present on best practices, whom to contact, how to navigate resources, filing TROs, and ethical responsibilities for attorneys when victims and abusers come to their office.

This topic is presented by: The Women in Law & Government Attorneys Sections of the CMBA; The Legal Aid Society of Cleveland; the Cuyahoga County Prosecutor's Office; and the Domestic Violence & Child Advocacy Center (DVCAC).

Some faculty members who will also be presenting include: 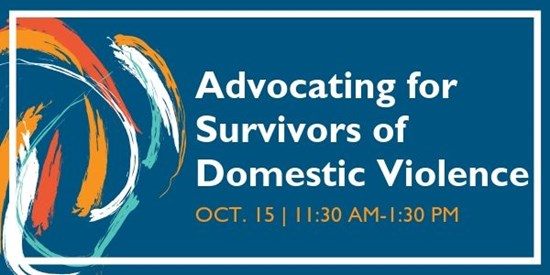 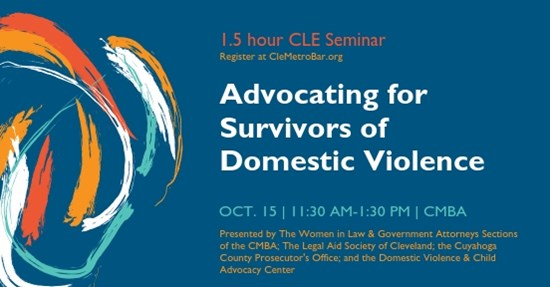 This past year, Richard Bell was the Chair of the Government Lawyers Section of the Cuyahoga Metropolitan Bar Association, he will present a practical approach for litigating Domestic Violence cases, best practices and ethical responsibilities for attorneys.

The Cuyahoga County Prosecutor's Office plans to use open-source genealogical databases like ancestry websites to help identify sexual assailant whose DNA was collected through rape kits but whose identities remain unknown.

"There are more than 130 open rape cases in Cuyahoga County and prosecutors plan to start tackling them by trying to identify the assailants with help from DNA-based genealogy databases, said Special Investigations Chief Rick Bell." 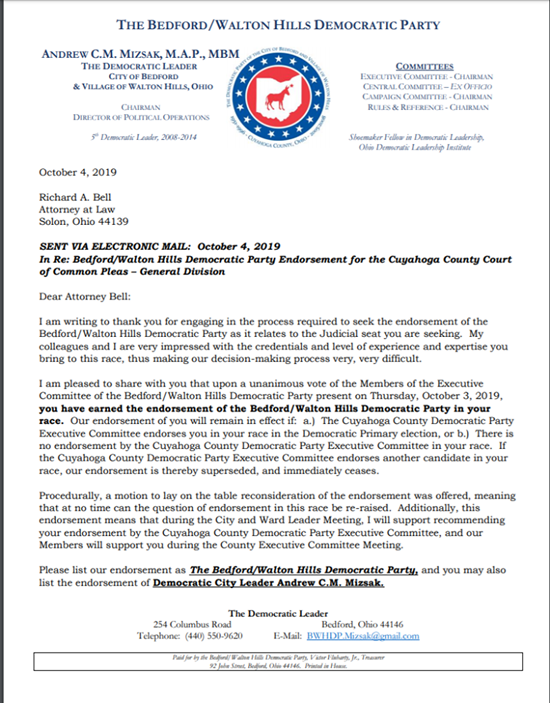 Thank you to the Bedford/Walton Hills Democratic Party and their City Leader Andrew Mizsak for giving me their UNANIMOUS ENDORSEMENT for the Judicial seat I am seeking. I am grateful for the support from all their members in this process. RICHARD BELL

Big news for police and rape victims! This spring I applied for federal grants to continue the rape kit investigations. We will use some of the money to set policy and procedures to do ancestry searches on the John Doe stranger rapists. The money that the federal grants will also help us continue the investigation of the back log rap kits forgotten on the police shelves and will help us collect DNA from defendants who were not swabbed when they were arrested. 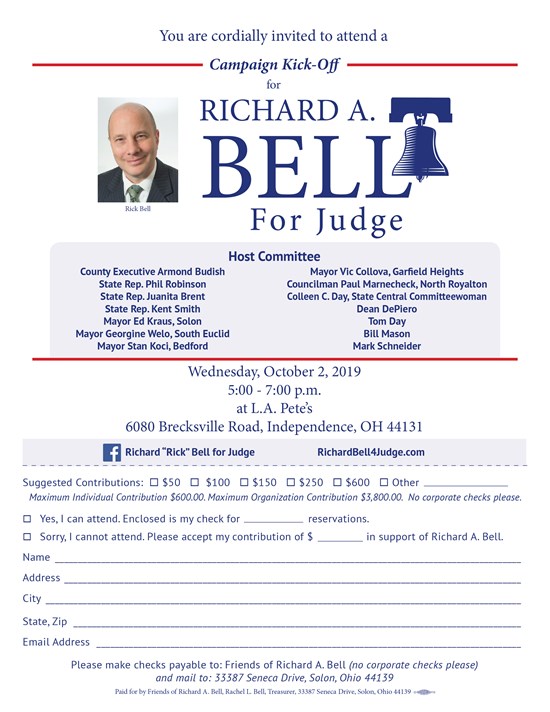 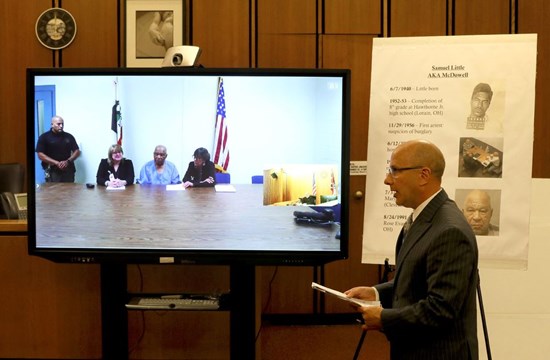 Prosecutor Richard Bell in the Courtroom making the Serial killer Sam Little plead guilty to Cold Case Aggravated Murders he committed in Cuyahoga County in the 80's and 90's. 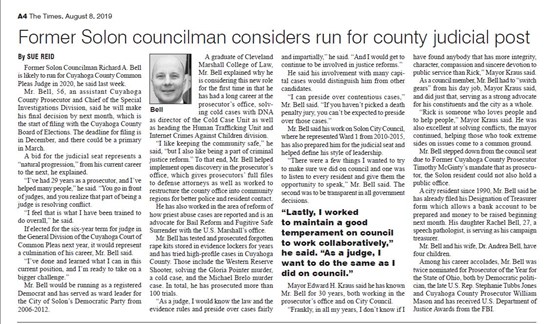 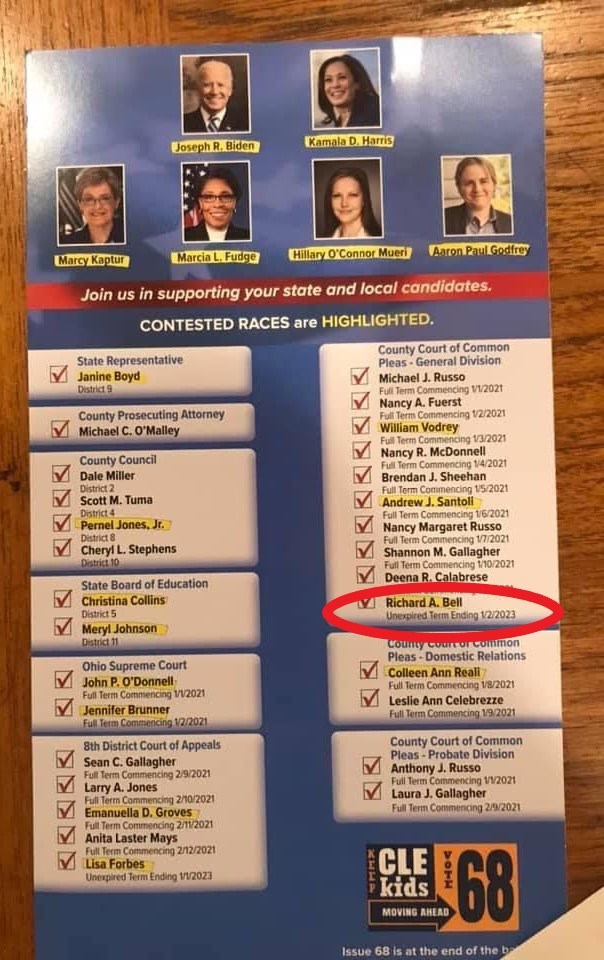 I have had the honor to be the Supervisor of the State of Ohio Internet Crimes Against Children Task Force since 2001. Today we announced that we arrested 28 people who tried to solicit minors for sex over the AllStar Game weekend. These predators actually sought out children on the internet and then travelled to meet them at a house in Newburgh Heights. That's where they got a big surprise ! All 28 were arrested by our Task Force team and put into jail. Congratulations to the Task Force personnel and big thanks to Prosecutor Michael C. O'Malley, Chair of the Ohio ICAC and Attorney General Dave Yost for providing the resources to do our jobs. Thank you to my Prosecutor Office Investigators, Assistant Prosecutors and Staff and also to Attorney General Agents, Analysts and Homeland Security, Secret Service, FBI, Ohio Adult Parole as well as Police Departments Newburgh Heights, Solon, Kent, Austintown, Streetsboro, Cortland and Wooster.
LOUD MESSAGE SENT TO THE BAD GUYS : Just Don't do it..we are out here and are happy to put you in jail.

An Epidemic of Disbelief: Why Don't Police Catch Serial Rapists 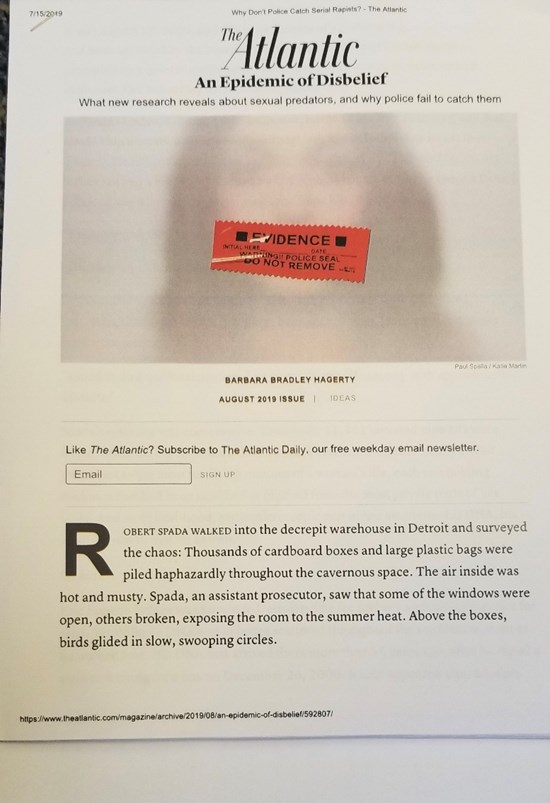 From the Atlantic Monthly page 1...our Cold Case Unit DNA RapeKit Task Force leads the country in indictments and convictions. Proud of our 40 member task force. Keep up the good work everybody! Keep the rapists in prison where they belong. (Special Investigations Divisions Chief, Rick Bell). 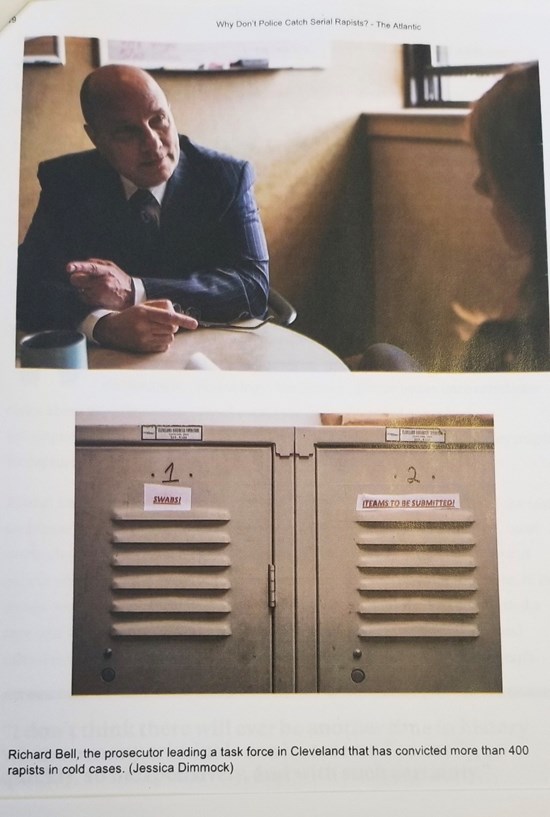